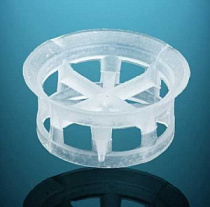 It was developed by British company MTL, which is also called CMR. Cascaded mini ring increases the turn-ups on the top and bottom positions. It also heightens the strength. Cascade mini ring (CMR) is a new random packing with rectangular windows, improved on the basis of pall ring. The height is reduced to half of pall ring and added one or two flanging on the edge of ring wall. This new kind of structure improves the ring’s mechanical strength. Because of the symmetry characteristic is damaged, thus, the direction rate is increased when it is put into the reaction tower. On account of the flanging, it turns the linear contact into point contact between the rings, which can not only increase the free spaces between the rings but also reduce the impedance of gases. And these contact points became the scatter point of the flowing liquid, to boost the exchange of liquid. It can increase the efficiency of mass transfer. Thus, the performance of cascade mini ring is more improved than the pall ring.